I know that most of you saw all of my posts on facebook about getting to attend a live taping of American Idol, but I wanted to share all of the details with you.

When we moved to California, I began researching everything that was available for us to experience that was close by.  Well, I got online to see how you could attend tapings of tv shows and ran across the site that gives out American Idol tickets.  I put my name on the waiting list, really just for fun.  I had no idea what it meant to get a ticket, or if this site was even legitimate.

So, you can imagine how excited I was when I got the email stating that I had gotten tickets to the Wednesday night taping during finale week.  I was ridiculously excited!  Then I had that wonderful feeling that this was probably not legit, and I would drive all the way to LA, to have people laugh at me that I actually believed I had a chance at getting a ticket.  I decided to go for it, even if it was a fraud!  (Now, I did call the company like 3 times to ask if this was legit!)

We (myself and a great friend from camp) left our house at 5:30 am because we knew that LA traffic would be bad.  We ended up hitting morning traffic right during rush hour.  NO BUENO!  I was super excited that I didn’t kill us or anyone else in LA traffic.  Anyway, we got to the LA Convention Center at 9:30 am and found our line.  The workers from On Camera Audiences was already there checking people in, so we got in the line of only about 40 people.  We waited in line for about 1 1/2 hours, and met some really great people.  NO ONE was crazy or rude.  Everyone was super kind and considerate, which was great!  At 11:00 am, the tickets arrived and they began handing them out.  Once we got our tickets, we had until 3:30 p.m. to just walk around LA Live (This is the area where the Staples Center and Nokia theater are located.  Lots of restaurants and a really cool courtyard to hang out in.)  We ate at ESPN restaurant, then hung out and “star gazed.”  This is where we got to see all of the top ten contestants and parents as they were heading to interviews or into the theater.  SO FUN!!!!!!

At 3:30 p.m., we got in line to enter the theater.  At 4:00 pm, the doors open and we headed inside!  Oh my, was it cool!  It looks exactly like what you see on tv, only brighter and louder!  We were 11 rows back on the left.  A “pretend Ryan Seacrest” came out to get the crowd excited and to tell us what was about to happen.  He was out only about 5 minutes then you heard a lady count down from 10, and the show began.  It was the fastest show ever, but so fun to be a part of!  At each commercial break, 4 people came out just to touch up Mariah Carey.  EVERYTIME!  It was ridiculous.  I was beginning to understand why Niki Minaj was so fed up with her.  Niki only had one gal, and she only came out a few times.

Anyway, it was a really fun experience, and yes I will be getting on the waiting list for next season!  And…Micah and I are headed back to LA this Wednesday to celebrate our 14th anniversary by going to a taping of Sports Nation at ESPN!  Yay! 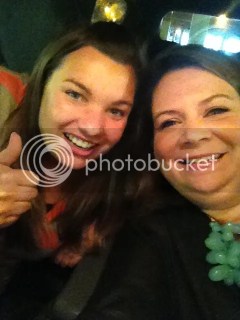 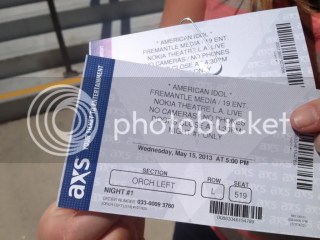 TICKETS!  So excited to have these in our hands! 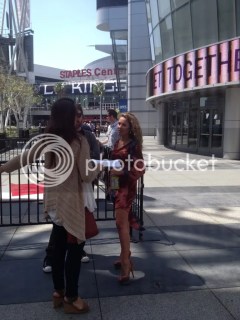 Hailey Rinehart getting ready for an interview. 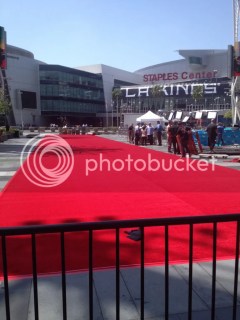 This is the courtyard area at LA Live.  See the Staples Center?!  So cool!  The real red carpet! 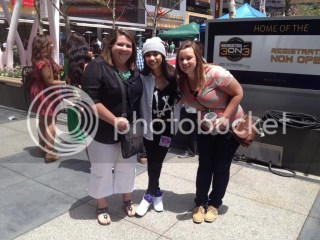 Jessica Sanchez…#2 from last season!  She is so tiny! 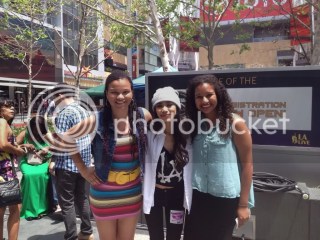 These cute girls had already put their phones away, so I took their picture and texted it to them!  They were so excited and cute! 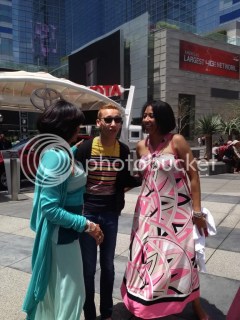 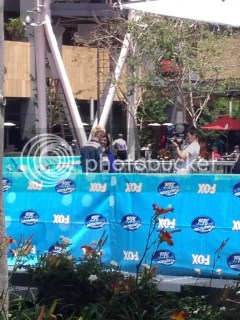 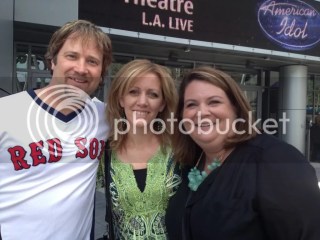 These are Angie Miller’s parents.  They were at the ticket booth signing in, and I stood there and waited for them to finish up.  Her dad was so nice and actually visited with us for a few minutes.  Her mom was still a bit upset that Angie was cut last week! 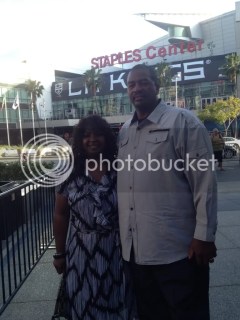 And the winner is…Candice Glover, and these are her parents!!!!!!!!  They were so nice!