Friday was a FUN day around here!  Well, let’s just say it was very eventful.  Benjamin was outside playing around 1:30 pm and got stung on the finger by something.  (hornet, bee, wasp?)  I gave him some Benadryl and put some on it to take away the sting.  That was all normal.  Well, then I realized that it was a bit more swollen than I would have thought, but I just figured I would watch it.  (Now, it was about 20 minutes after the sting that he began itching his ears.  However, he does this fairly regularly because he gets water in his ears and it really bothers him.  I thought nothing of this!)  About another 20 minutes went by, and I needed to head out to the barn to check on Grace who was riding horses.  I looked at Ben’s hand and it was really getting swollen, but again I really just thought “Wow, that was quite a sting.”  So, I walked out to the barn for about another 20 minutes.  When I came back inside, Ben was laying on the couch eating chocolate chips.  (That last part is important for dramatic purposes of my story!)  Anyway, I walked over to look at his hand, and the poor baby had hives all over his face.  So of course, I handled it like a great mother and began screaming for him to get up!  (That’s what good moms do, right?!)  When he stood up, he had chocolate ALL OVER his neck!  I began trying to look to see how bad the hives were (and they were everywhere and really bad), but was getting chocolate everywhere!  So, I gave him another Benadry and called Micah in a panic.  (Oh, and I threw him in the shower because we needed to get the chocolate off of him!  Poor baby!)  Micah comes in and I am freaking out, to say the least.  Micah looked at me and said, “You’re gonna need to leave the room!”  Yep, I was not calm.  So, I let Micah look him over and then went back into the living room.  It was affirmative, off to the doctor we would go!  At this point, I really wasn’t sure if I was heading to the ER or the doctor, but I knew we were going down the mountain!  Remember that our mountain takes 25 minutes just to get down our 6 mile road, then it’s another 45 minutes to the doctor.  So, I drove with my hand on Ben’s chest and kept making him talk to me the whole time.  About 30 minutes down the mountain, I could tell that the Benadryl was kicking in and that the hives were getting better.  I knew that we were not in a life threatening situation at that point, so I relaxed a bit!

We now know that Ben is allergic to some sort of stinging insect and it is SERIOUS!!!!!  No more playing around!
In all my time of being around children (and that’s a lot of time), and children with severe allergies, I have never actually witnessed the reaction itself.  SCARY!  So glad he was okay!
On a completely different note, here is an amazing picture from the top of our mountain.  This picture was taken by one of our staff here and I told her I was going to steal it! 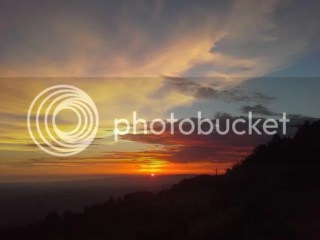 If you look really close, that power line that is in the right, actually looks like a cross.  Cool, right?!